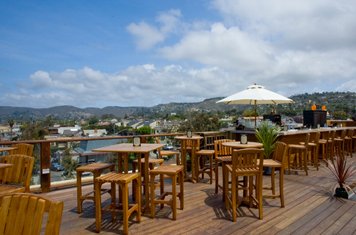 How to Survive Laguna Tourists

It is that singular, frenetic time of year, right before the summer tourists, when Laguna Beach residents resemble squirrels stocking up for winter.

We are excited for summer on the one hand, yet we are bracing ourselves for the onslaught.

We freely admit that it's a bittersweet feeling of embrace and frustration. We realize the downtown is starting its tense, random congestion, and so we hurry to shop and visit friends.

We cope by remembering our little shortcuts to avoid the crowds. We have "secret" parking spots and stores where we know the owners will feed the meter, if needed.

We have "our" restaurants and "our" barstools, which soon will be taken by someone with a sunburn.

So in this spirit, here is a top 10 list of free advice — because we are, in the end, friendly — about how to navigate Laguna in the summer.

9. Look for the secret mountain tunnels: Unfortunately, in a recent raid on a homeless encampment in the canyon, Laguna Beach police discovered and closed the secret Euro-Canyon tunnel that served as a brilliant bypass to Aliso Viejo and conveniently let you out near Opah on Pacific Park Drive. There are other tunnels rumored near Crystal Cove and Aliso Creek, but I've been told not to report them for my own safety.

8. Learn how to drive a Panga: On good authority, the stand-up paddleboard shops are starting to rent the abandoned Panga boats that are washing up on our shores from the illegal immigrants. These sturdy skiffs are quite effective at circumnavigating Coast Highway traffic, enabling you to drop off at several hotspots like Javier's, Newport Harbor or Dana Point with no parking issues.

7. Buy a helicopter: Can't get in at the Rooftop? Just land your helicopter. It's very effective at opening up a table.

6. Take a vacation: There are some people — perhaps those who fly helicopters — who avoid the traffic issue altogether by taking an extended summer vacation. To me, that's cheating, but if you can do it, great.

5. If you must drive, avoid PCH: Seriously, though, it's no real secret that Glenneyre is the only viable street in the summer. If you're going south, the goal is to get to Crown Valley as quickly as possible, so I usually go down Glenneyre to Diamond (which has a light) before cutting back to PCH. Heading north? If you are ambitious, you'll want to zigzag through downtown off Glenneyre, turning at Mermaid to either Second or Third streets to the canyon, then head up Cliff Drive and over to PCH. Under no circumstances should you take Ocean Avenue to PCH. That light is a nightmare.

4. Bike, skate or scooter: There is a reason the skaters have been bombing our hills. They are practicing their summer tourist avoidance maneuvers. As dangerous as it is to skate, bike or scooter around town, it is pretty effective at avoiding traffic.

3. Eat and drink: If the traffic is gridlocked, just order more food or another round of lemonade. Many of the establishments near Main Beach are slammed during the summer so if you are local, chances are you frequent other places. Gary Gibson, owner of The Vintage Poster store, says "one of the best kept secrets for tourists is Splashes in the Surf and Sand." Artist Colleen Corbett, a 31-year resident, likes Sundried Tomato Café and raves about its happy hour. Jones Ceramics owner Robert Jones, who was born and raised in Laguna, likes the Royal Hawaiian.

2. Take the free shuttle: Everyone is waiting for the third week in June when the free shuttle starts. Used by tourists and locals alike, the shuttles are basically mandatory for getting around. However, there is nothing more frustrating than patiently waiting for the 20 or sometimes 30 minutes between shuttles during peak hours only to find them standing room only. In which case, you:

1. Walk: More often than not, you walk in Laguna. It's a good thing, usually. When using the crosswalks, however, watch out for the tourist drivers, who for some reason do not understand the concept of a crosswalk. Even with flashing lights or flailing hands, they sometimes do not stop. It's annoying. But that's why they are tourists. So we try to forgive them.

David Hansen is a writer and Laguna Beach resident. He can be reached at davidhansen@yahoo.com.